This article was originally printed in The Oakland Press.

When I finished “Gone Home,” I was emotionally drained.

The new title from The Fullbright Company is one of an emerging genre of video games where calling it a game is somewhat inaccurate. There’s no way to die, no failure state, no real threats of any kind. It might be more descriptive to just call it an interactive work of fiction, much in the vein of the excellent Dear Esther, from developer The Chinese Room.

What makes “Gone Home” remarkable is its ability to tell a compelling story about the awkwardness of human interaction, and lets the player get more invested more deeply in the narrative by making him or her a part of it.

At first glance, “Gone Home” might seem like a horror game. Set in 1994, you play as a young woman named Katie who’s returned home after a year spent backpacking in Europe to find yourself along in your family’s huge, empty house. Players are tasked with exploring the dark, creaky mansion to find clues to what’s happened to your mother, father and sister, while a thunderstorm rages outside. The story is told as you discover letters and notes written by the family and explore the house’s secret compartments and passages.

For a long time, I expected there to be a supernatural element to the story, and the atmosphere does nothing to dispel that. “Gone Home” even drops a few red herrings to lead you to that conclusion; your younger sister seems to be into ghost hunting and has left some paraphernalia around. But the story is far more deeply focused on the emotions of its cast, told through written notes and audio recordings, and remains firmly grounded in the realities of life in 1990s suburbia.

The story really is the entire game, so I don’t want to reveal any plot points, suffice to say that some heavy themes are explored, including many seldom touched on in the world of video games. There are no life and death situations, no fate of the world at stake. The situations are real and relatable to an average person. The characters’ insecurities and secrets are revealed by exploring the environment, especially those of Katie’s sister, Sam, who is the focus of the story.

At times it feels invasive, digging through your family’s belongings to learn more about them. Playing as Katie, you come in as a stranger, knowing nothing about her family. But as the story develops, Katie herself discovers secrets even she didn’t know about her relatives, and it seems as if she didn’t know them as well as she thought she did. 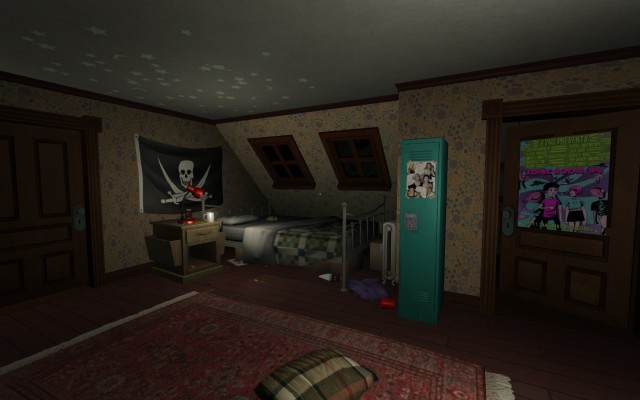 That sense of isolation, coupled with the loneliness of the empty house, really support the narrative themes. Near the end of the story, the sense of melancholy began to weigh on me. While I finished it in two and a half hours, the length turned out to be perfect, as that was exactly when I needed to stop and decompress.

While definitely not for everyone, “Gone Home” is a rare game that can tell a personal, affecting story without cramming it down your throat through cutscenes and dialogue. It uses the distinction of being interactive to involve the player in ways a movie couldn’t. And just as not every movie is meant to be “fun,” you shouldn’t pick up this game up expecting to unwind.

But if you have an open mind and an appreciation for good, unconventional storytelling, “Gone Home” is a must-play.

“Gone Home” is a PC, Mac and Linux title available on Steam. The Fullbright Company provided a review code for the purposes of this review.

This entry was posted in The Dialogue Tree. Bookmark the permalink.