On wings of dreams — An interview with the makers of Owlboy

This article was originally posted on my sister website, The Dialogue Tree. 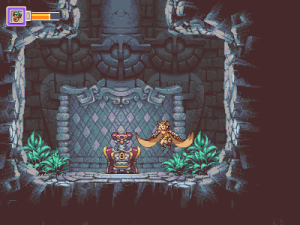 Sometimes the hype for a game can become so intense it causes changes to the game to fit fans’ high expectations. Owlboy is an extreme example. It’s been delayed for two years to make a larger, more intricately-designed world based on feedback from its first demo. But this year, with any luck, Owlboy’s long story will see a happy ending.

The long anticipated title from D-Pad Studio is the brainchild of Simon Stafsnes Andersen, and It’ll soon be featured in this year’s PAX 10 at PAX Prime. The game introduces a unique blend of 16-bit graphics, Kid Icarus-styled vertical platforming, twin-stick shooter combat, and the sense of flight originally created by Super Mario Bros. 3.

The main character of Owlboy, Otus, lives in a world full of flying islands suspended above an infinite ocean, and flying is a necessity. The story begins when Otus’ village comes under attack, and revolves around Otus finding his role in the world.

Owlboy draws from no single source of inspiration, but is deeply influenced by nostalgia of the SNES era. Andersen said one of the initial seeds that started the development was watching the way the raccoon suit works in Super Mario Bros. 3: letting players descend slowly after a jump.

“I got the idea to reverse that, and build a whole game around the idea of flying by tapping a button,” Andersen said. “We later found out that tapping for such a long game would get a little tiring, but the concept is still there. Then, as I explored this concept, I considered the idea that you could meet new civilizations on islands far away.”

Making Otus an owl just seemed to fit the idea of the game Andersen was trying to create. “I spent about a month trying to figure out the main character. After a conversation with my girlfriend, suddenly it hit me that I hadn’t tried owls before. Suddenly, everything clicked together and the story sort of wrote itself.”

Though you can visit other islands and meet new people, you can’t necessarily communicate with them. Like many heroes of the 16-bit era, Otus is mute.

The game’s beautiful pixel art was created by Andersen himself, but he didn’t want to use retro-styled graphics as a crutch or an appeal to gamers’ nostalgia.

“My goal is to create a world that feels visually stunning using the medium I’ve chosen,” Andersen said. “I’ve made a conscious decision to avoid shortcuts like rotation, blur, gradients and bloom as much as possible so the feel is consistent (of course, it’s going to be in there at times when we don’t have a practical way to avoid it.) I’ve also reused colors as much as possible to make sure everything ties together. My hope is that people will appreciate the hard work we’ve put into this game for many years to come.”

The game’s control system is deep, yet approachable; it plays like a cross between a vertical platformer and a current gen twin stick shooter. Instead of equipping guns, Otus is joined in his journey by sidekicks called Gunners, which were created out of the creators’ love of getting new weapons in games like Zelda and Mega Man. Otus carries the Gunners around with him and uses them as his offense, with the player controlling both characters

“I wanted to explore the carrying mechanic, and realized that it would be a lot more fun if you carried your weapons around rather than just equipping one. This is where the concept of the Gunners came along.”

While Andersen prefers a keyboard and mouse to play Owlboy, there will of course be the option to play the game with a controller for a more classic experience, albeit less precise.

“There’s this cozy feeling of holding a controller in your hands when you play a side scrolling game, so it really only depends on what feeling you desire,” Andersen said. “If we do things properly, the control method won’t matter. All that matters is that you play the game and enjoy yourself.”

To match the 16-bit-styled graphics, you might expect a matching 16-bit soundtrack. Though chiptunes are featured at key moments in the game, D-Pad Studio has decided to eschew such music in favor of a grander, orchestral score.

“The most important thing I wish to achieve with our music is that our games are filled with music you can remember, preferably whistle. So many games gain a special place in people’s memories because of the memorable themes they had.”

Despite high praise for Owlboy’s original demo and early development, the game has seen a few setbacks on the road to release. Originally planned to come out in 2011, the team felt the demo was giving away too much of the story and revamped it to focus on the first dungeon and scaled back tutorials. The feedback they got from the demo cast the game in a new light for D-Pad.

“Watching people play and hearing their expectations for the game, we looked at our game and realized that there was no way we could meet these expectations with the current version of Owlboy,” Andersen said. “Our demo had set the bar ridiculously high and considering how much work the demo was, there just wasn’t time.”

Andersen also said they were afraid that players weren’t understanding how to play the game from the first demo. “Even if we had included our first area, we realized we didn’t have a proper way to teach the player the game’s mechanics without feeling pushy. We finally decided to reluctantly pull the game back and rework absolutely everything.”

And they did, in fact, redo just about everything based on comments from the demo. Combat was redone; large, open areas were added; three dungeons were added; the story was reworked to have more impact.

“I think we’re getting to the point where we can actually meet the expectations people have set for us. I think the game is about four times as large as it was originally, and looking at the demo now feels really strange in comparison. I realize it’s been a long time. I’ve been working on this game for six years now. But we’re hell bent on making this a fantastic game. We definitely want to make this worth the wait.”

D-Pad Studio is planning a release of the game sometime this year after the latest version of the game is demoed at PAX.

“This game is going to release in 2013 or there will be chairs flying out of windows,” Andersen said.

And he hopes that the final product will live up to the fan’s expectations.

This entry was posted in The Dialogue Tree. Bookmark the permalink.